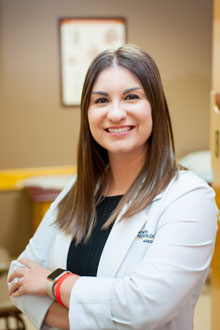 Prior to joining the Athens Neurological Associates (ANA) team in July 2018, Anna Beth received her master’s in medical science in physician assistant studies from Mercer University, and her undergrad in biology from North Georgia University. Originally from Cleveland, GA, Anna Beth knew at a young age that she wanted to go into medicine. She began her career working in orthopedics where she discovered her passion for helping people with chronic disease. Forming a bond with patients that is centered around trust, care and long-term impact is what attracted her to ANA.

When she’s not working, Anna Beth loves to spend time with her fiancée and their Maltese named Tucker. She also loves to dabble in photography and watch the Georgia Bulldogs. What most don’t know about Anna Beth is she used to be on the 4H Shotgun Team during her youth and led her team to a statewide competition.